A strangely hectic Friday practice gives Ferrari hope going into the seventh round of competition.

Who would have thought, that after the dominance shown by the Mercedes team early on, that Ferrari would be on top at the end of the day. In the first practice session, the two Mercedes cars were close to a full second ahead. Ferrari looked bogged down and struggled to find pace. Everything looked status quo for the season. Hamilton and Bottas have been playing leap frog so far, switching victories and keeping the rest of the pack out of the fun. However, a driver error from Championship leading Hamilton, saw his Silver Arrow hit the wall in the second practice session. After clipping the yellow chicane, Hamilton lost control of the car. His right rear wheel smacked hard into the wall, ripping up the Pirelli sponsor ad with his tire, and causing fears that his gearbox might have sustained damage. The impact was severe and ended Hamilton’s session.

With the points leader out of the way, the Ferrari’s went to work. The Scuderia set a blistering pace, with Leclerc 0.074 seconds ahead of teammate Vettel. Valtteri Bottas came third just 0.13 seconds back. Red Bull, on the other hand, had a little mix up that put Max Verstappen into the dirty air of Pierre Gasly that caused the flying Dutchman to also graise the wall. Montreal has been synonymous with wall collisions over the years, and has a section of track named for it. The Wall Of Champions. And it claimed Romain Grosjean Saturday morning in practice. Numerous others had close shaves with it, too.

Another Montreal staple, the groundhogs, made a quick appearance on track to welcome Kimi Raikkonen back to the city.

Following his shunt, Hamilton was slow leaving the pits for the third practice session on Saturday morning. Presumably to allow for repairs to be done to his car. The Mercedes team came into the weekend with their first upgrade of the season and were expected to run away as a result. Early on, they did just that. But if the second and third practice sessions were any indication, that simply wasn’t the case. In fact, Ferrari looked far more dominant. At the conclusion of the third practise session, Vettel was on top. His team mate Leclerc was second. Next came the two Mercedes cars, with Hamilton ahead of Bottas. Verstappen and Gasly for Red Bull were fifth and sixth. Daniel Ricciardo and his Renault in seventh. Norris, Perez and Kvyat rounded out the top ten.

One again, a portion of the Circuit Gilles Villeneuve was dedicated to local driver, Lance Stroll. His first as a member of Racing Point. Stroll scored his first points in Formula One on his debut two years ago. Struggled last year before crashing with Toro Rosso’s Hartley on the opening lap of last year’s race. The Montreal-native, though, made a short-lived appearance. A little over twenty-four minutes in, Stroll’s car seemingly blew up. A hydraulic issue caused flames to burst out of the rear of Stroll’s RP19 in quite dramatic fashion. This resulted in the local not setting a time at practice and leaving doubts as to whether or not he would be present come qualification.

Racing Point made the decision to return to the used engine it had just swapped out. Despite the high wear already on that engine, it would have meant a penalty to use their third, and final engine. This was of interest to many teams. Mercedes had brought with them a new engine upgrade, and that upgrade was also used by Racing Point and Williams. So, with Stroll’s engine troubles came concern from the Silver Arrows. With the swap, Stroll was able to join qualifying. Albeit briefly. Both Racing Point cars were eliminated in Q1.

Qualifying drama as Magnussen slams hard into the wall of champions

Ferrari dominated the first session. Vettel, followed by Leclerc led the way. Bottas and Hamilton followed for Mercedes with Verstappen and Hulkenberg closely behind them. Stroll and teammate Perez were both short and eliminated. Kimi Raikkonen, and both Williams cars, Robert Kubica and George Russel also didn’t make the cut. In the second session, Kevin Magnussen had a huge shunt to end the session. Oversteering into the final chicane lead Magnussen into the wall of champions, hitting hard, and bouncing off into the pit lane wall on the opposite end of the track. The accident brought out a red flag and end to the session. As a result, Red Bull’s Max Verstappen was eliminated. With him, Albon, Kvyat, Giovanazzi and Grosjean were also knocked out.

Interestingly enough, Magnussen did qualify for the final session, although with the damage he sustained to the car, wouldn’t participate. It was the first time Magnussen had qualified for the final session in Canada in his career. The remaining nine drivers came out for a scorching final round. By the narrowest of margins, Vettel takes pole. In doing so, he beats his own track best that he set last year. Hamilton second. Leclerc third, and Ricciardo fourth. 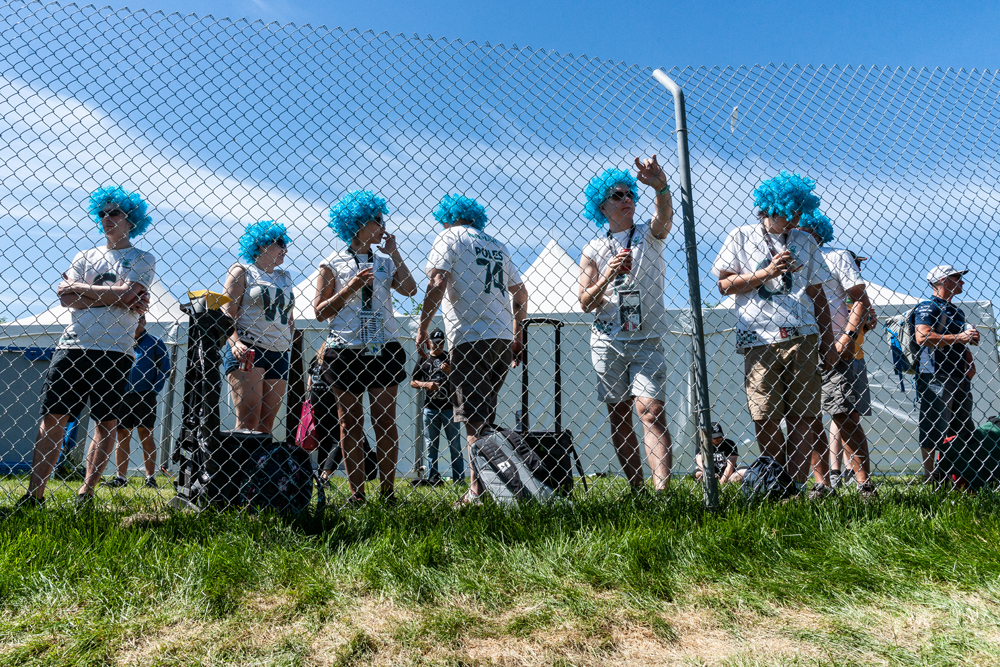 Lights out and we are racing in Montreal

Sebastian Vettel got off to a great start. Hamilton as well, taking the inside lane away from Leclerc. Alex Albon got sandwiched between a Racing Point and an Alfa Romeo, damaging his front wing and was forced to pit on the opening lap. Other than that, the opening moments were incident free. Vettel built up a big enough lead over Hamilton, to take away his DRS ability. Everything looked to be going to plan for the Scuderia.

On the ninth lap, the course claimed its first retirement when the rear right breaks on his car overheated. So much so, that the suspension melted off the car. With flames coming off the rear wheel, w as it dangled off the car, Norris pulled into the pit lane exit. Double yellow flags were waived but a safety car wasn’t deployed. For some reason, the deserted McLaren was left where it fell. On the 51st anniversary of McLaren’s first victory, Norris’ early retirement stings. Giovanazzi spun after clipping a curb on the 30th lap. He was able to continue on, luckily enough. The only other retirement would be that of Toro Rosso’s Alex Albon.

It was a day that had many great battles, especially in the middle of the pack. Bottas and Ricciardo had a dog fight for several laps. Few drivers can defend a position the way Ricciardo can. At one point, the Australian left the track, throwing dirt into the face of Bottas, yet retained his position. Eventually the faster Mercedes of Bottas did get by the Renault, but it was a great battle and not an easy feat. Ricciardo also had a good fight with his former teammate, Max Verstappen. One that he ultimately also lost.

Lance Stroll, too, had himself a good scrap. It might not have been the perfect weekend for the local lad. Not even close. Yet still better than the previous year. Stroll earned his first ever career points on his first home race weekend, and a spirited battle this year saw him come from 17th to finish in the points. His Racing Point and the McLaren of rival Carlos Sainz added an interesting element to a very interesting race all around. Often, the mid-pack battles are the more interesting aspects of modern formula one.

There was one other important battle. One that defined the race itself. 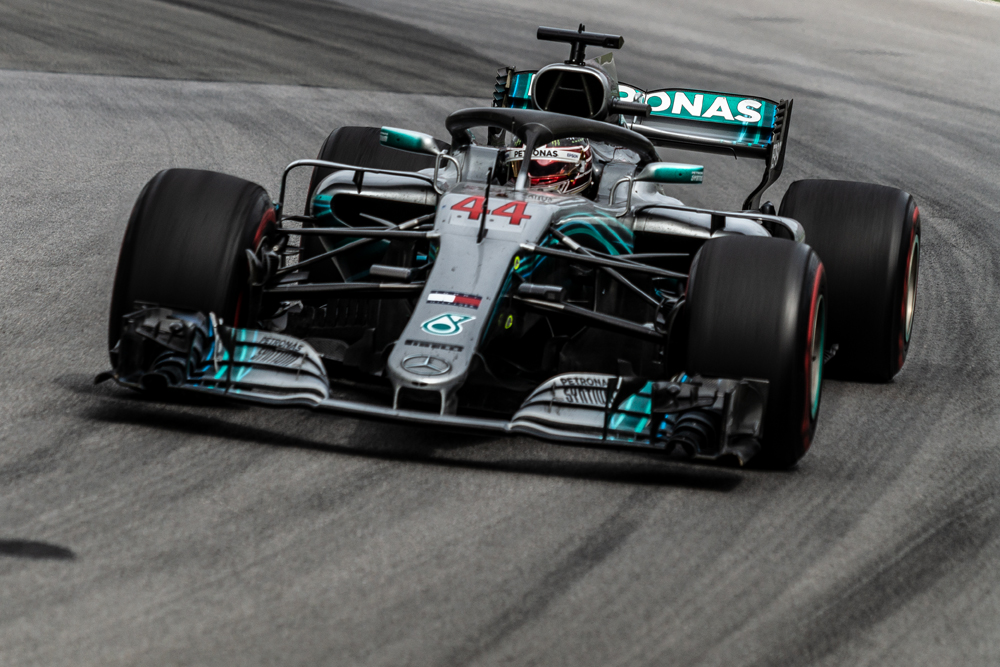 As has been the case so many times, Vettel doesn’t deal well with pressure from the rear. More often than not, that push comes from Lewis Hamilton. Again this was the case in Montreal, but this time with much more controversy. Vettel caught a curb and locked up, sliding off track briefly before re-gaining enough grip to rejoin the course. Which is what the FIA stewards had issue with.

Another unforced error caused by the impending pressure of Hamilton catching Vettel once again sent the four time world champion into trouble. Hamilton had been gradually gaining on Vettel before the incident. The hot and turbulent air that comes from following a car closely in Montreal often causes issues for the trailing driver. At one point, Hamilton brought his Silver Arrow to within a mere 0.800 of a second behind the Ferrari. Upon investigation, it was ruled an unsafe re-entry and punished with a five second time penalty.

The fact remains, however, that had Vettel stayed on the tarmac, and off of the grass, we wouldn’t have a debate to divide us. He did impede Hamilton from passing, nearly caused an accident and forced Hamilton to slam his breaks and took away a passing window. Yes. This is true. However, Vettel is perhaps correct that the FIA needs to allow racing car drivers to, well, race.

Despite having crossed the line first, he takes second place and very nearly missed standing on the podium altogether. Not just because of his penalty, but the enraged German stormed off into the FIA garage instead of weighing in and attending mandatory post-race interviews. Following that, he marched angrily back to the Ferrari paddocks where he would have surely stayed if he hadn’t have been forced back to the podiums for fear of a further penalty. Ferrari’s chances are slipping away and another penalty would have potentially iced their season.

Still visibly angry, Vettel switched the cards that sit in front of the podium cars, placing the second place placard in front of Hamilton’s drive. Childish. Surely to send message, though.

Hamilton told media that this was “Not the way I wanted to win, but I would have passed anyway if not for the wall.” But Vettel had much more to say. Much more.

“You’re going to go through the grass, and you come back, have amazing grip. Where the hell am I supposed to go?” said Vettel from his cockpit, “I had grass on my wheels. It’s his fault if he decides to go that way. If he’d gone to the inside, he’d got past me.” he continued. Hamilton though, had the racing line and held it as is his right. He was forced off track by the Ferrari’s maneuver, too. There are seldom black and white, clean cut incidents, and this one certainly resides in the grey area.

Hamilton takes first. Vettel second. Leclerc third but was just off from usurping second from his teammate. Bottas finished 4th and earned the extra point for the fastest lap. The French Grand Prix is next. 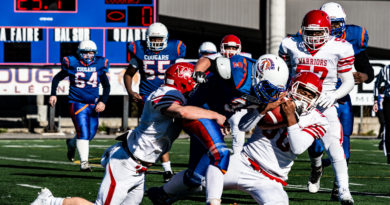 April 20, 2018 Brian Perry Comments Off on Alvarez to face Kovalev