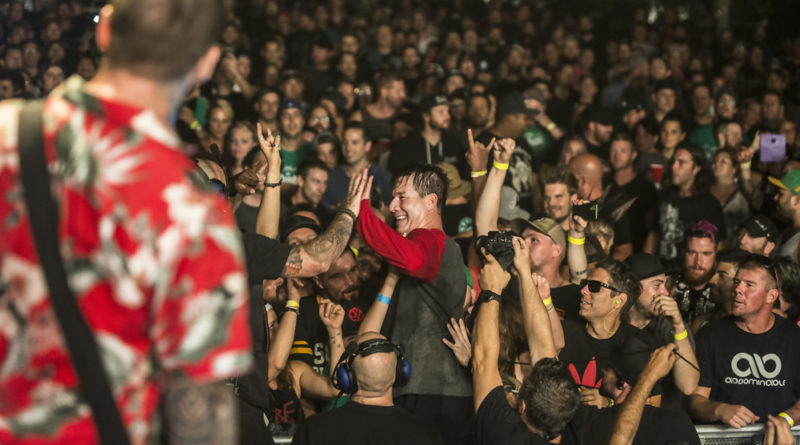 Music 4 Cancer is a non-profit organization that raises money to aid researchers find a cure for cancer. Using the power of music. Perhaps the name might suggest the polar opposite, but we assure you, funds are not being raised in support of this deadly ailment. We swear. This well-received charity event has been rocking the streets of Sainte-Therese, Quebec, since 2010. Has had some of the biggest names in Punk Rock grace its stages and is showing no signs of slowing down. As evidenced by this year’s stellar roster.

When it comes down to it; we’ve all known someone who has or is battling this terrible affliction. Certain life moments supersede music, but music has the power to heal – quite literally. Cancer remains the leading cause of death among Canadians. In fact, according to the Canadian Cancer Society, a whopping 30% of deaths in Canada in 2017 came as a result of cancer. Let that resonate for a second. In 2017 alone, an estimated 206,200 new cases of cancer, and 80,800 deaths from cancer occurred in Canada. Second leading cause of death in the world. Moreover, these figures do not include non-melanoma skin cancer cases. These numbers show how serious this problem is, and why organizations such as this are so important.

Music 4 Cancer founder, Jay Epinat, knows what the fight against cancer is all about. In fact, the festival exists due to his Mother’s battle against lymphoma. You may even see her sitting at the ticket counter of the festival, having survived her fight despite being given a zero chance of survival. Epinat was inspired by a the discovery of a new treatment that ultimately saved his Mother’s life. Those were the early days of the festival, coupled with advice and encouragement of a plethora of musicians Epinat met on his travels.

Keeping with that spirit, we asked the same five questions to members of five of the bands playing this year; a smorgasbord of musicians. As we alluded to, so many of our lives have been touched by the disease. To many, the word alone strikes fear in the heart. Almost one in every two Canadians is expected to be diagnosed with cancer in their lifetime, and one in four Canadians will die from the disease, a new report by the Canadian Cancer Society predicts.

The jury is in

“Unfortunately, my father and my mother-in-law both died from pancreatic cancer” said Pat Thetic of Anti-Flag. Adding “This is a particularly difficult cancer because once you get the diagnosis there is very little time for treatment, and the treatment that is offered isn’t very effective and has difficult side effects. Also the cancer is very painful so the dying process, although quick, is difficult to watch. The word “cancer” to me and my family has been a very fast death sentence, so it sucks.”

“I’ve lost family and very close friends to cancer” recalls Denis Buckley of 88 Fingers Louie. “Some cases these were people who were in remission and went suddenly, other times it was a prolonged illness. It’s been heartbreaking to see in either case.”

Subb‘s Martin Charron, too, has a story to tell on the subject; “My father was diagnosed with bladder cancer in 2012. He have had several treatments to remove the tumor. Every time it was a success. But the tumor kept growing back. They didn’t want to do the big surgery of removing his bladder because he has cardiac condition and the doctors were afraid that the surgical intervention would kill him. Until one day, his bladder sagged. It shrank so much that they couldn’t check in with the camera. So they had no choice but to do the big surgery and removed his bladder. The surgery was a success and because of that, my father is still alive.”

“We have certainly had friends and family affected by cancer. Pets, too.” exclaimed Me First And The Gimmie Gimmie’s bedazzled frontman Spike Lawson. “Some survived, some not. Eventually nobody survives, anyway. It’s nice to think that the ones who fought hardest had a better chance of survival, and I wish I could wholeheartedly believe that. When I hear the word, I feel a certain inevitability, given everything we know (and how little we seem willing to do) about the poisons we dump into the air, water and food supplies. My cynicism does not change my belief, however, that curing cancer is a cause worth fighting for.”

The lives of many are affected daily. So when a charity such as Music 4 Cancer pops up, we owe it to ourselves and our loved ones to stand up alongside it and pledge our support. Should bands be more active when it comes to charities? Should it be the standard for those who can help to do so?

“I think so” says Russ Rankin of Good Riddance.  “I think some degree of altruism is good for everybody. We have been involved in raising awareness and money for certain organizations for years.” While Spike Lawson has some stinging words for the suits. “I think it’s incumbent on every one of us to help those less fortunate however we can.” said Lawson, before driving home a solid point. “Musicians are in a unique position to be heard by large groups of people, but elected politicians can actually affect policy and spend public money. I’d love to see a consensus among them to help people in need. I am not holding my breath.”

“Any time we can use our band to raise awareness and funding for organizations that do good work we are excited.” exclaimed Thetic. Continuing in true Anti-Flag tradition, he added; “However, that is our view for our band. Not all bands see that as their mission and I don’t fault them for that. People need to create the music that is authentic to them and use that music in ways that are authentic to them. For us, looking for ways to join together to multiply our efforts is the focus of our band and we use that power from joining together to try and make things better for everyone no matter your wealth, sexual preference, gender identity, race, religion, or flag they fly over your head.”

Positivity is the key

Those that are battling this or any other ailment need their friends and family more than ever. But what do you say to those people. The resounding response from our five jury members is simple. Be positive. Fight. You are loved and you are supported. And Spike thinks you should listen to music, of course.

Ultimately, we all want to live peaceful lives, in harmony. Stress free. Without drama. Without fear of diseases and sickness. What does it take to create a world where we all can exist in happiness?

“I think there is too much fear, avarice, and greed in the world. If we can work to eliminate that, and see ourselves as more interconnected, we could do some good” says Russ Rankin. A sentiment echoed by Denis Buckley, who said “We need more empathy and less apathy. We can get there if we really try.”

“I guess, we’ll have to start with ourselves” thinks Martin Charron. “Don’t judge yourself too hard. Be kind to one another. Getting rid of all the political systems around the world would be a good start . We’ll see” 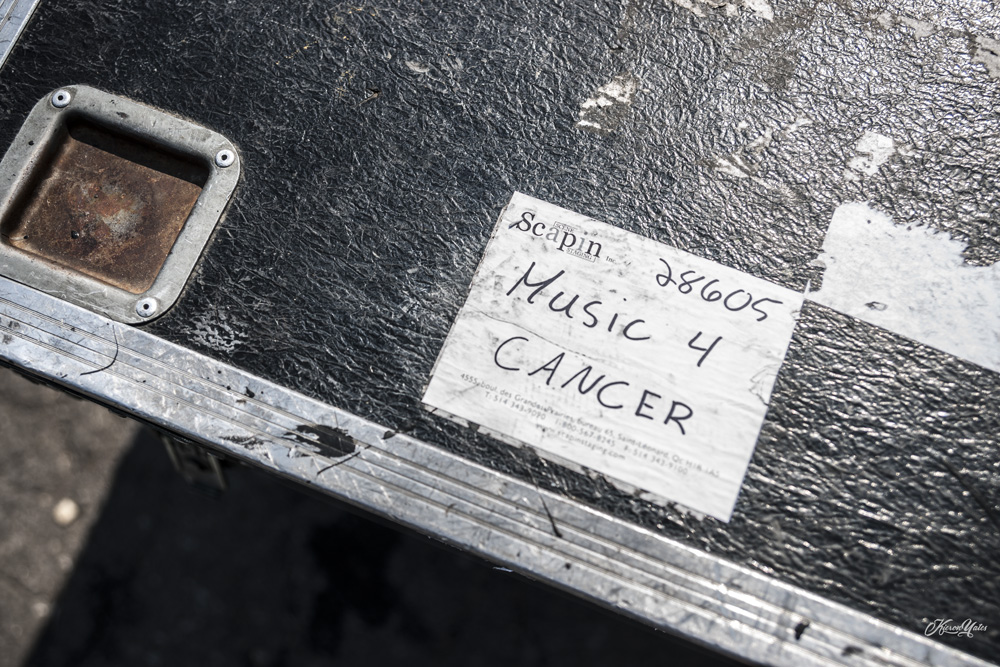 “The way to have people live peacefully is to tear down the false cultural, racial, and economic barriers between people.” says Pat Thetic, again sounded exactly the way we’ve come to expect from Anti-Flag. A band who have never held back their feelings or thoughts. He adds: ” Once you realize these divisions are arbitrary constructs created to give power to small numbers of people to the detriment of the rest of us, then you can organize to tear down these false barriers and build a new future for the benefit of the many and not just for the few. We have a unique perspective because we travel the world to play shows. In our travel we meet amazing activists and artists every day who are fighting for equality and social justice. You may not know about them because they are working in their own ways and away from the spotlights of most media, but they are working diligently and ferociously. Because of this we remain positive, and believe that the people who are interested in making their community, their country and the world better for more than just themselves are growing in number and making real and lasting change.”

“When people can afford human essentials with one four or five day a week job, I feel like they’ll be a lot less resentful and prone to violence” says Spike Lawson, who perhaps sums up the current state of his nation in so few words, so perfectly. “We don’t seem to be trending in that direction, unfortunately.”

While we wait for what will surely be one of the highlights of the summer festival season in the Quebec region, it is important to salut all those that strive to make the world a better place. For all of us. Donations can be made on site or through the organization’s website. Every amount, no matter how large or small, helps. Support Music 4 Cancer.

This article is dedicated to our friend Brian MacSmith of K-Man & The 45s, who suddenly passed away from cancer in October of last year. 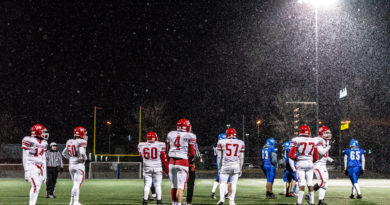 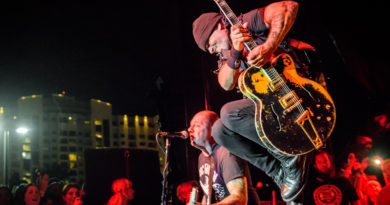 Who are The Bash? (Watch) 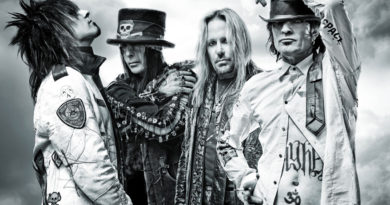 September 15, 2018 Brian Perry Comments Off on Motley Crue have reunited