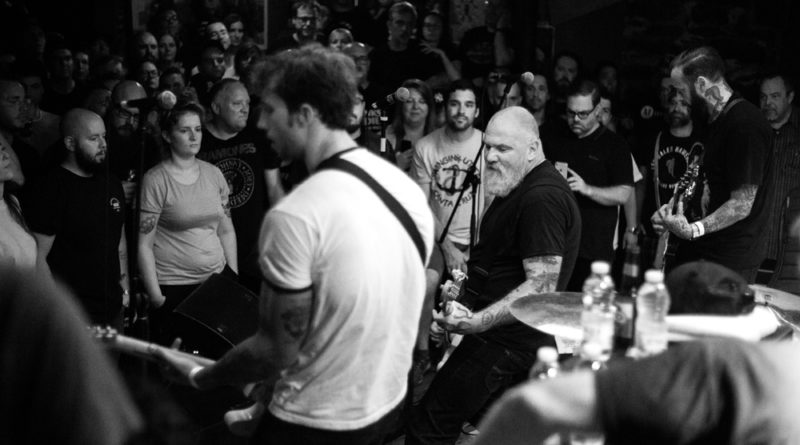 Heading up to the Plateau, to Bar L’escogriffe, I had completely forgotten where the venue was. After a few minutes walk from the metro, I knew I was wandering in the right direction. I spotted a familiar older crowd adorned in converse and Ramones shirts, gathering outside on the terrace.

Showtime was in ten minutes, so I got in line , along with the majority of the crowd, for one last beverage. If you haven’t been to L’Esco, it’s a basement venue, that was beginning to fill up fast. I knew it was going to be an oversold show, with the terrace still containing just as many people as there was already inside the venue.

With no delay, you could hear the screech of the guitar as Lucy and Gwendolyn of Dog Party hit the stage. Giving us “Hit And Run” of the latest album and a variety off of their five studio albums. A song with a true Riot Girl influence, “Los Angeles”, got everyone’s head moving to the drum beat. I didn’t see many people leave, so I assume they gained some new fans last night. With a pop surf rock sound, their strong vocal harmonies resonated through the room. They wrapped things off quick with not a lot of stage banter, being a younger band.

With it being CJ Ramone‘s last time touring sadly, I was surprised this show was actually happening on time. Rare in music, especially in punk rock . When you have a lot of band members, it’s easy to lose track. Anything can happen between soundcheck and when it’s time to play. Especially in such a diverse city like Montreal. From getting lost while sightseeing or checking local eats, it happens often. But not this time though. (Read about Dog Party’s Montreal Poutine hunt here)

Ten o’clock sharp, CJ and band mates made their way through the the fully packed venue. A roadie had to barge a path through to the stage for the band to follow. Several times. As he went back and forth from the stage to the bar with beverages for the boys. Being short, I had to find a place standing on a couch and perched on the window ledge. People were on tables and chairs, any object that could be climbed on, was. Some goon directly in front of me went as far as to stomp his boots on a coffee table while slapping hell out of the ceiling. Until his girlfriend called him out on his neolithic behaviour. Dog Party would have been proud of her. I was.  The show should have been moved to a bigger venue at this point. Too late. It was time to break a leg.

Energy on a high, they kicked off the night with a beloved favorite. A cover of “Let’s Dance”. I don’t think there was a person sitting still in the whole place. Next was a new tune, “One High One Low”, from CJ’s new album, “Holy Spell”. It was one of my favorites, so I was already singing along.

I should have been saving my voice. Because I knew we were going to get to hear lots more Ramones covers. Giving us “Bonzo Goes To Bitburg”, off their ninth studio album, “Animal Boy”. You could tell, for some this was the first time they had seen CJ. Weather it was the first or tenth time, the lyrics were being shouted back almost as loud as the band.

I absolutely loved the amount of crowd interaction. There’s nothing more magical than that perfect unison moment when everyone is singing the song back at you. Rocking out with hit after hit, from “Rockaway Beach”, “Gimme Shock Treatment” and “The KKK Took My Baby Away”.

In between each cover they would play a song off of one of his solo albums. Over the years, I have seen him a couple of times and it was really beginning to  dawn on me, that this was the last time. They went into “Sheena Is A Punk Rocker” and most girls in the room were losing their shit. I have to admit I was. I lost my shit. I was a huge fan of the Ramones when I was young but I think that song always stuck with me.

With any backing band, phases and lineup changes happen through the years. One of those journeys began in 2012. When Steven Soto from two of the legendary bands, Agent Orange and The Adolescents, joined on guitar and backing vocals. That journey came to end in 2018 when he sadly passed away in his sleep at the age of 54. To play a fitting tribute, they played “Rock On”, a song written in memorial of a friend.

Bringing the mood back up, they continued with such hit’s as, “Outsider”, “Wart Hog”, “I Wanna Be Your Boyfriend” for all the romantics and “Glad To See you Go”, for those that had lost the romance. Followed by a couple of different covers in the mix that weren’t Ramones. Shockingly enough.

The band had started with a bit of room on the already small stage. By now though, people had moved all the way up as close as they could. The ceiling and walls were soaked with condensation from the over excited crowd. You could see those who didn’t buy a ticket on time peaking through the small window, hoping to still catch a glimpse of the show. Part of my thinks they may have had the best spot and certainly the greater view.

CJ then asked; “Is there anyone in the military here?” It was met with silence as he then realized he was in Canada. “Nobody” he said with a smirk. We do have our armed forces. We just don’t use them as much as our neighbours do. He dedicated “Commando” to all those fighting.

“53rd and 3rd” was next, followed by “Do You Wanna Dance”. There was no objection from the crowd, they were losing it. The goon was beating on the roof again. With “Pinhead” next and the famous “Gabba! Gabba! Hey!” was chanted at full force

Then it came to the end. Well not exactly. “You know, we usually leave the stage right now and then get you guys to cheer for the encore, not here, not today in Montreal. We’re having too much fun. We’ve got three songs left for you guys.” exclaimed CJ. Truth is, he probably realized it would be too hard to got off and back onto the stage again. Somewhere, a relieved roadie sighed. Leading into two song’s everyone knows – “I Wanna Be Sedated” and “Blitzkrieg Bop”.

Was it really over? Not before giving us Motorhead‘s “R.A.M.O.N.E.S”. I was right! We were very lucky to hear eighteen rocking covers live.

It was a truly fun night. That I or anyone there won’t forget anytime soon. Some older folks were lucky enough to see Ramones live. For us, we got one surviving member playing the nostalgic punk. Legends that will be in our minds and hearts forever. 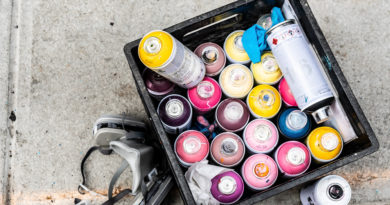 Under Pressure 2019 in images (photo gallery) 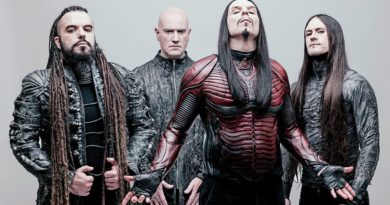 Mud City Meltdown is about to hit New Brunswick

September 10, 2019 Brian Perry Comments Off on Mud City Meltdown is about to hit New Brunswick